A Touch of Lilly by Nina Pierce Guest Post and Giveaway 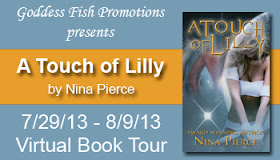 A Touch of Lilly
by Nina Pierce

Ex-Chicago detective LILLY D’ANGELO has a secret she doesn’t share with anyone. A master of the one night stand, she’s given up ever finding a soul mate and thrown herself head first into her career. That is, until she captures the wrong alien. Kidnapped and sold into the sex slave trade, she’s shipped into deep space. Barely escaping with her life, Lilly now travels the galaxy working as a bounty hunter using her secret talents to bring down criminals and seeking revenge on the one male who ruined her life.

Agent DALLAS SAWYER works for deep space’s version of the FBI. After a disastrous mission that left several of his team members murdered, a president executed, and Dallas near death, he’s determined to take down the assassin targeting government officials. When a sexy human female gets between him and his goal, Dallas and his alien partner find themselves on the receiving end of a passionate night they won’t soon forget and a proposition that may very well blow up in their faces.

Because in deep space … true love can happen with just a touch. 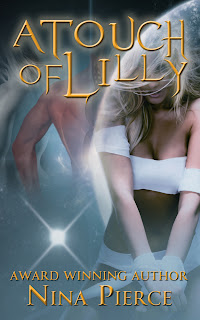 Lilly D’Angelo wasn’t expecting a trip down memory lane when she sauntered into the dingy tavern, but the acrid stench and gruff hum of the Friday night crowd carried her back to one of the seedier establishments on Chicago’s south side nonetheless. Except for the clientele, the owner had managed to replicate nearly every detail right down to the blue haze of cigarette smoke and the soft crooning of a jazz band on the corner stage.

Pushing the sour thoughts of home from her mind and focusing on the job at hand, Lilly morphed her features into her sexiest vixen pout and moved gracefully toward the long bar on the other side of the room. Her voluptuous bre***s, spilling temptingly from her silk blouse, led the way. The eyes watching her leather-clad a** sashay around the battered tables were clustered on various life forms—none of them human.

Yeah, definitely not Chicago. Hell, this wasn’t even Earth for goodness sake.

“Regent’s ale, straight up, hold the brenic.” Lilly ordered the local brew in English, hoping the two-headed alien behind the bar had a cochlear translator in one of those eight holes that passed for ears. Satisfied when one head nodded, she settled on a stool, making sure her fur jacket and blouse parted just enough to offer a seductive view of her cleavage. She shifted, allowing the black leather skirt to ride up her thigh and expose a little more ***** real estate. The reflection she saw in the mirror behind the liquor bottles was every inch a working woman on the prowl. She wasn’t trying to attract anyone in particular, just hoping to mislead the locals into thinking she was some female making a living with her body—which was true—just not as the human streetwalker she impersonated. 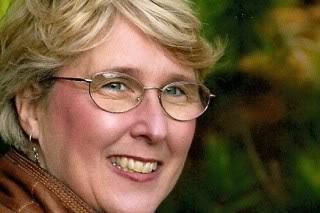 USA Today Bestselling author, Nina Pierce, grew up in a house full of readers. Nina's discovered the passionate side of romance with her sexy stories. For her, it's all about the sweet scent of seduction mixed with the heartwarming aroma of romance.

Nina resides in New England with her high school sweetheart and soul mate of twenty-eight years and several very spoiled cats who consider her "staff". When she’s not writing she enjoys spending time with her three grown children, one love-sick son-in-law and a heart-melting grandson. 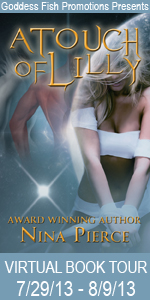 The Spice of Life
Guest Blog by Nina Pierce

“Wow, Nina you’re a writer? What do you write?”
“Romance.”
“I love romance. Boy meets girl. Girl plays hard to get. Sunset moment when everyone finds true love.” *sigh* “I’d like to read yours.”
“Just a caveat…mine are spicy romances.”
“Of course they are. All romances are a little naughty.”
“Weeellll, it’s more than a little. Mine are true romances with the bedroom door wide open. There is no fade to black when it comes to the sex scenes.”
Heavy pause. Whispered response, “Erotica? Why didn’t you say in the first place? What’s your website addie?”

I can’t tell you that’s how all the conversations go when I reunite with old friends and tell them about my new career. But it amazes me how many women of all ages are enjoying erotic romance. This genre that began in the back rooms of small internet publishing companies a decade ago has exploded in the digital age and has now gone mainstream with Berkley, Harlequin, and Kensington, just a few of the NY publishing companies that are jumping into bed with this genre. And then of course there’s that explosive NY Times and USA Today bestseller that was found on the nightstand of many former conservative romance readers. J

Nina will be awarding A print copy of HEALER’S GARDEN and author swag (Shipping to US winner only. International winner will receive a $25 Amazon OR BN Gift Card in lieu of print book and swag) to a random commenter during the tour.